Munch and a Movie Makes Many Merry

Long Beach Soroptimists threw its 4th annual movie party … and pie … on January 20th to raise funds for Meals on Wheels of Long Beach. The movie was the uncut version of Blazing Saddles, the place was the Art Theater of Long Beach.  Jeff Hathcock, writer, director and film expert with the Osher Lifelong Learning Institute at Cal State Long Beach, and his daughter, Allyson gave some background about the movie to the nearly 300 cheerful supporters who munched on hot dogs, beans and pie before watching the movie. After the movie, fun-loving guests moved outside to the parking lot where they donated $5 each to toss pie at organizer, Jaye Johnson. Thanks to donations from Dave Sakamoto of F&M Bank, Park Pantry, Donna Skinner, Julia & Pat McConaghy and Rick & Jaye Johnson and sponsorship by Lynn Shrum, the event raised over $8,000. 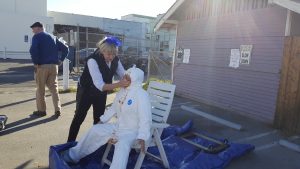 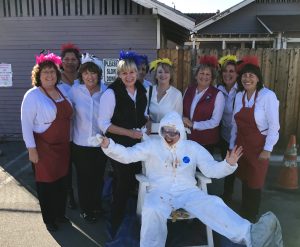